We recently informed you about the potential name change for the HTC Incredible HD to the HTC Thunderbolt 4G, and now it looks like that name is going to be official, as we have what looks to be the first solid images of the device.

As you are probably aware, the handset is going to be Verizon’s first 4G LTE handset and it is due for an official unveiling at CES 2011 on January 6th.

The guys over at Droid-Life have managed to obtain the first pictures of the device, and it looks very much like the HTC Desire HD for those of you that have it, except for the obvious Verizon logo and also the LTE 4G branding.

The one notable difference that you’ll discover though, is that the HTC Thunderbolt 4G features a pop-out kickstand, which reveals a sizable speaker which we’re hoping is surround sound supported. It looks pretty cool and we the love the fact that the kickstand disguises it when not in use – very clever idea there HTC. 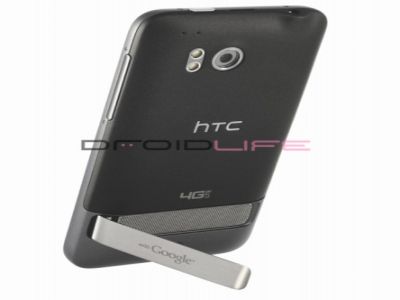 Take a look at the pictures for yourself over at Droid-Life and let us know your thoughts on them. Do you like the design of the Thunderbolt 4G?