Following on from our report last week about the possible release of the HTC Supersonic this week, it looks like it could be a reality, following a model listing that has been spotted in a HTC inventory database.

As reported from GadgetsDNA, the image which you can see below comes direct from a Sprint dealer, who has pinpointed the HTC A9292 listing as the highly anticipated HTC Supersonic smartphone.

If you didn’t know already, consumers are making a pretty big deal out of the Supersonic, since it is the first 4G WIMAX supported handset by Sprint. Even Sprint themselves have used the Apple iPhone to show the possibilities of their 4G network, in a recent Ad here.

Lets hope Sprint put us all out of our misery and officially announce the HTC SuperSonic at CTIA Wireless Show 2010. 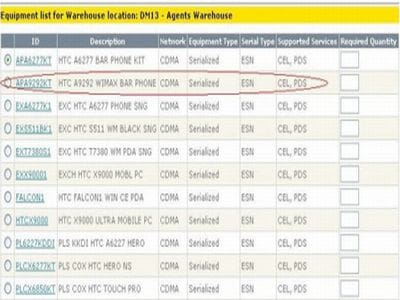