Just as expected, HTC has finally unveiled the HTC Rezound smartphone to the world. It happened at a special event just a few hours ago and we can now share key information about the handset to you, relating to a solid release date, pricing at Verizon and official specs as well.

Since everybody already knew the Rezound was coming, consumers may find it difficult to gain that certain excitement factor whenever a new phone is launched. Having said that, the Rezound will certainly hold its own against the likes of the Galaxy Nexus and Droid RAZR on Verizon, but no doubt that many people will be buying this phone due to its built-in Beats audio technology.

The specs match up to previous speculation too, as the HTC Rezound will be equipped with a 4.3-inch super LCD WVGA 1280Ã—720 display along with a dual-core 1.5Ghz processor. You’ll get 1GB of RAM and two impressive looking cameras – an 8 megapixel sensor on the back capable of 1080P HD recording, and also a separate 2 megapixel camera on the front of the device as well. As expected, the Rezound will ship with Gingerbread, version 2.3.5 to be exact, but it will also come with HTC Sense 3.5 on top as well.

One important thing to note though if you’re planning to get one, is that HTC also confirmed at their event that the Rezound will be ‘Ice Cream Sandwich ready’ which basically means that it will get an update at some point next year, no sign of release though unsurprisingly.

As for the Beats factor, you’ll get a custom set of Beats headphones included in the box. We just hope that the included 1620mAh battery that comes with the Rezound is able to handle all the bass-pumping tracks, as well as 4G LTE data that you’ll be churning out on a daily basis – we all know what happened to the Thunderbolt don’t we.

Here’s the important info if you think that the Rezound suits your tastes: It will go on sale at Verizon starting from November 14, and as you may have guessed it will come in at $299 on a two-year deal with the carrier, a standard price for their 4G LTE lineup these days.

Who is interested in this device and who is planning to skip it in favor of the Galaxy Nexus or Droid RAZR? We’ll be bringing you more details on the Rezound shortly. 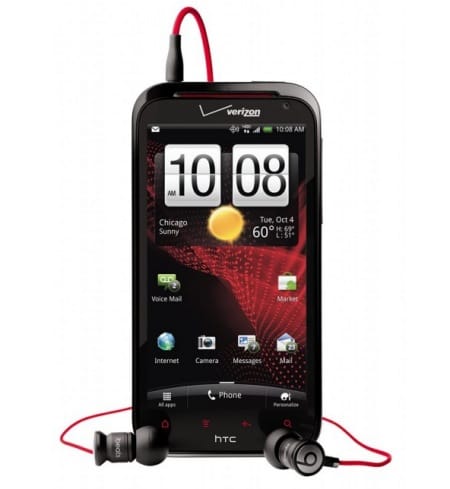