Remember the rumored HTC Pyramid smartphone that we told you about recently? Well it looks like this handset is indeed real as we have found another picture of the device for you to take a look at, one which gives you a solid look at the phone for the first time.

Last time we only had some renders to show you, but this one is an actual photo of the device, which we presume is a prototype which has been prized away from HTC’s manufacturing HQ. The picture which you see below has been obtained courtesy of TechBlog.gr, it shows the handset alongside the HTC Desire HD just for your reference: 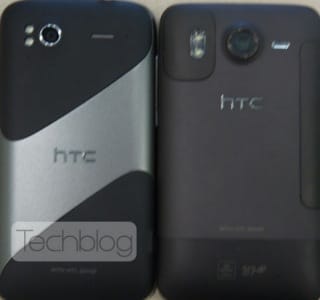 Once again, we see that unusual silver design on the back of the device, we’re not sure if we like it yet, but you could argue that it’s a nice way to keep smartphones fresh and not just have the same old boring black design on the back – do you agree?

No mention of specs yet, but we can see from the photo that the Pyramid will have a decent rear camera combined with a dual LED flash as well as a 3.55mm headphone jack situated at the top of the device.

Are you interested in this handset, based on this hybrid silver design that you can see? We’ll let you know when we hear about specs for the Pyramid.