As one tablet sees its demise another one rises from the ashes. The HTC Puccini has now been spotted in the wild just days after the downfall of the HP TouchPad. The new tablet is due to hit Ma Bell first, closely followed by AT&T. According to Engadget sources the new Puccini is still being tested, but should not be too long before consumers will be able to get their hands on yet another Android tablet.

AT&T already has two LTE tablets on the market, so this HTC offering will round things off nicely. There is no fear of the phone maker reducing the price of the Puccini just weeks after release, as they have the full backing of Android and its huge array of apps, which is one of the reasons why HP pulled the plug on their webOS device.

It was back in May when we learned about the new HTC Puccini and some of the proposed specs; but if you cannot remember then here is a little reminder. There is a dual-core 1.5-GHz processor, 1GB of RAM, 8-megapixel camera, 16GB of internal storage, 101-inch screen and also Android Honeycomb. That’s as much as we know so far, but if you would like to see what the beast looks like, then check out some of these images thanks to the guys over on Engadget. 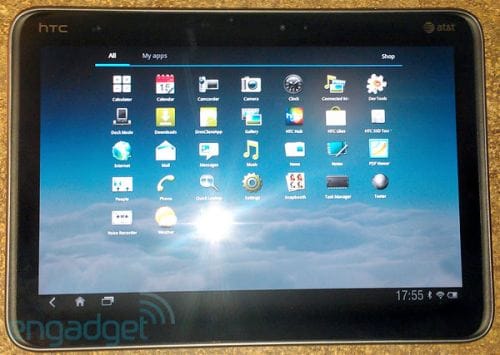 There are no real surprises in the design, as the likes of Samsung, Motorola and HTC seem to be following the same form factor as the iPad. What Apple did when they launched the iPad was offer something fresh, new and exciting — we might be waiting sometime until rivals offer the same.

However, it will take a brave company to change the tablet form factor, but something needs to change if they have any hope of competing with the iPad.