If you had to choose between two of the best Android phones right now, the choice would have to be the HTC One vs. Samsung Galaxy S4. There are certainly some people that would favor the likes of Galaxy Note 3, but this is really classed as a phablet and more for those people that want something half way between a tablet and smartphone.

Today, we wanted to highlight a new video that landed on YouTube over the last week titled “HTC One UltraPixel vs. Galaxy S4 camera”. It is a hands-on review with both of these popular Android smartphones and looks at the cameras to see what handset would be the best choice for a camera phone.

HTC One camera specs — the image above is a screenshot from the video and features the mains specs for HTC One’s camera. You shouldn’t be too quick to count the HTC One camera as inferior to the Galaxy S4 based on megapixels.

HTC take a lot of pride in their new UltraPixel camera technology on the HTC One, which might only feature 4 megapixels, but offers increased pixel size to capture more light. 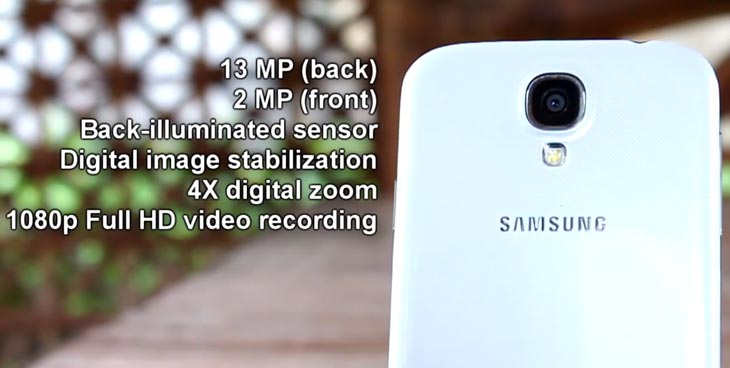 Samsung Galaxy S4 camera specs – Looking at camera specs alone it seems the Galaxy S4 has a big head start over the HTC One, if you look at only the 13 megapixels, but we urge our readers to watch the video comparison below this article to understand a lot more about UltraPixel’s and how both smartphones perform side-by-side.

You can see the almost 15-minute video below, so take a look at the thorough camera test and let us know your choice of HTC One vs. Samsung Galaxy S4? What made you decide on your favorite smartphone?

If you want to see the HTC One vs. iPhone 5 in a camera test, then take a look at our earlier article that features a video and some detailed articles taking a closer look.