This year may only be five months old but thanks to the arrival of several top smartphones, it’s certainly a great time to buy a handset. And, having turned up in February and April respectively, two of the biggest have to be the HTC One and Samsung Galaxy S4, the new Android powerhouses on the block.

But, despite being well received by fans and critics, how do the pair stack up against the longstanding Apple behemoth, the iPhone? With the iPhone 5 having arrived last September with much fanfare, we take a brief look at the handsets’ key areas to see which, if any, has the overall edge. 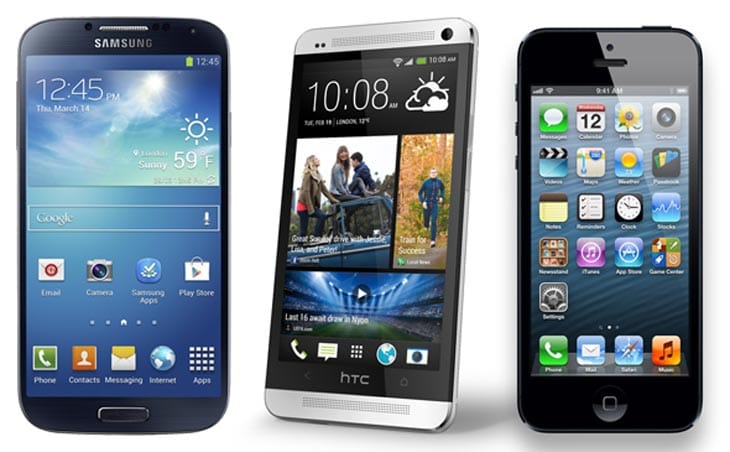 Design – Everyone loves a good looking phone, and this is a department Apple has never had much trouble with. The iPhone 5 is no exception; impossibly light and thin, swathed in titanium and dominated by a tidy 4-inch display, it screams class and feels lovely in the hand. Following suit the HTC One also plumps for titanium, although it’s a little bit larger and rounded than the Apple device. A massive 4.7-inch display and attractive speakers make the front look nice, and it’s definitely a step up for the Taiwanse firm.

And the Samsung Galaxy S4? Well, having stuck with the polycarbonate found on previous handsets there’s little to report, and it certainly lacks that high class nature of the other two. Whilst it’s light and ergonomic, it’s hard not to be a little underwhelmed by the overall look of the device.

Display – As well as being varied in size, each of the devices’ displays also have different strong points. At 4-inches the iPhone 5 wields the smallest, but thanks to its LED-backlit iPS LCD nature it provides vivid and impressive visuals. Although it doesn’t have the highest ppi, images look wonderfully bright and crisp and video watching is always a pleasure.

For excellent colour representation the HTC One’s 4.7-inch display does very well, managing to combine both excellent colour reproduction and superb levels of detail into one package, yet despite not matching the whopping 468 ppi of the HTC, the Samsung Galaxy S4’s offering is a real show stopper. At 5-inches it’s not only large, but bursting with vibrancy and clarity enough to make it the best around.

Camera – A smartphone camera can often make or break a potential purchase for many people, and as a result all three handsets come out blazing in the imagery department. With its clever UltraPixels and Zoe imaging tech the HTC One offers an innovative take on the traditional camera, while the iPhone 5 weighs in with some sharp results thanks to its 8 megapixel snapper. Yet, once again, it’s the Samsung Galaxy S4 that proves the most well rounded, with a hatful of modes complimenting a 13 megapixel camera capable of top draw results.

Verdict – Separating the three is a tough decision and it will always come down to what people look for from a handset. With the HTC One offering camera innovation and a premium design, the iPhone’s unadulterated class and solid performance and the Samsung Galaxy S4 top specifications, they are certainly three of the best handsets around, and it may well be down to one particular feature that sways it, depending on the desired usage.

Thanks to Dan Grose of Phones 4u, which has some of the latest mobile phone contracts.