Our smartphones replace so many gadgets we used just a few years ago and have now become redundant thanks to the modern phone. When it comes to popular smartphones with good cameras the HTC One and Apple iPhone 5 compete at the very top of the table, and while it is true that Sony phones could be classed as the best for cameras, the HTC One is one of the best Android phones around and the iPhone 5 sets its own rules thanks to a loyal fanbase.

HTC One vs. iPhone 5 camera thoroughly tested — if you want to learn what smartphone offers the better camera then we have a couple of tests to show you, which aim to deliver the answer you’re looking for. The first comparison can be found in the video below this article that had been recorded in 1080p and the settings are on auto for both the HTC One and iPhone 5.

The video runs for almost one and half minutes and performs a simple video shootout, which features a split screen with the iPhone 5 and HTC One overlapping as people and the background move from one handset to the other. This is one of the best side-by-side comparisons we have seen on YouTube. 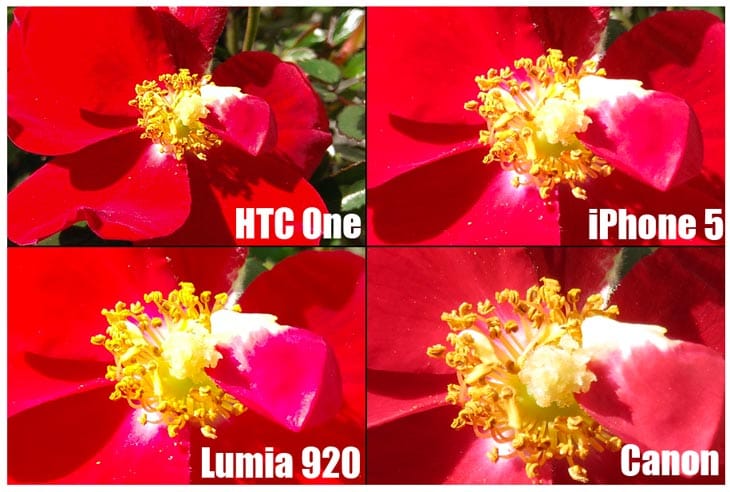 The reviewer has published photos side-by-side with the Nokia Lumia 920, iPhone 5 and HTC One, but also with a Canon Elph 520 HS digital camera as well.

Take a look at the review on Tech Hive and see how the devices compare for daytime cityscape, Macro in full sun with bright colors, low-light portraits with flash and without.

You can also see the HTC One battery life compared to the Samsung Galaxy S4.