With the release of the HTC One expected to hit UK networks on March 15, this would mean that the BlackBerry Z10 would have had a month and a half head start. Now while some of you would say how can you compare these two devices because they are on different platforms, there could be some of you out there considering a switch because of the latter being the first BB10 device.

The HTC One and the BlackBerry Z10 look like brothers, with the former being the better looking while the latter is the smaller sibling. The Z10 also looks a lot cheaper, but because there is a lot of innovation in regards to the new BlackBerry 10 OS (which is why UK businesses are trying the BB10 out) we would suggest you not to write this off just yet.

There are many reasons to buy either handset, the HTC One has far more apps available because it is an Android handset (although not the latest version) 32GB of RAM and just over 16 days of standby time are compelling reasons to go with the One. However, the BlackBerry Z10 boasts 2GB of RAM, and a very sharp and high-resolution screen. 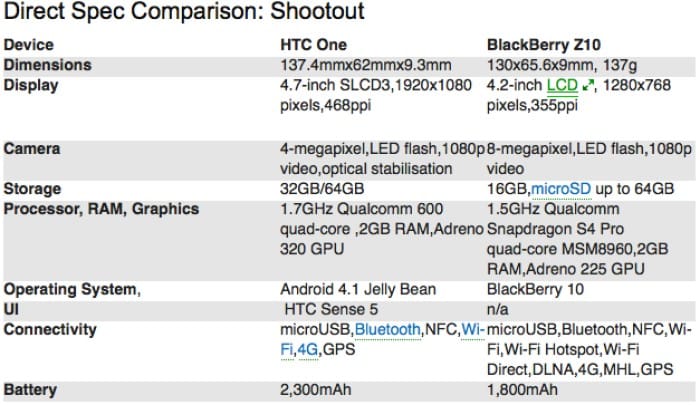 There have been several comprehensive reviews and ratings of the HTC One and the BlackBerry Z10, with the former coming out the winner on all of them. CNET gives the former 4.5 out of 5 and the latter 3.5 out of 5. PC World has also put these two handsets through their paces and while they have given the Z10 the same score as the previous review, they have scored the HTC One a little lower.

However, Laptop Mag seems to agree with CNET that BlackBerry still has work to do in order to compete with their rivals. We would suggest you read each of those reviews to see how these handsets compare, as well as viewing the video we have embedded for you below.