Although HTC are yet to officially confirm a mini version of the popular HTC One, it looks like it is almost a forgone conclusion. Countless image leaks have spread online suggesting that a release is imminent, and now we have some fresh evidence which seemingly confirms that the smaller device will still come with an HD quality display screen.

When it releases, it’s also no secret that HTC will want the device to go head to head with the already official Samsung Galaxy S4 Mini, with the Korean manufacturer already confirming that the smaller version will be available this Summer. The standard HTC One comes with a 1080p-based 4.7-inch display, with rumors previously suggesting that HTC will change this to a 4.3-inch display with 720p resolution for their mini.

This now looks to be confirmed, as the HTC One Mini has shown up in an official User Profile page, as noted by GSM Arena. There, we see some fairly boring information on the device, but a text entry for a 1280×720 resolution display which confirms the 720p quality that was only previously a rumor.

This should now reassure consumers that the mini HTC One is still going to be a very capable device in the market, but obviously we are still waiting for the most important aspect of any mini smartphone – the price compared to its original. If the Samsung Galaxy S4 Mini is due out first which is looking likely to be the case, then HTC could win over a lot of fans if they match Samsung’s price or even go one better and introduce a cheaper price. 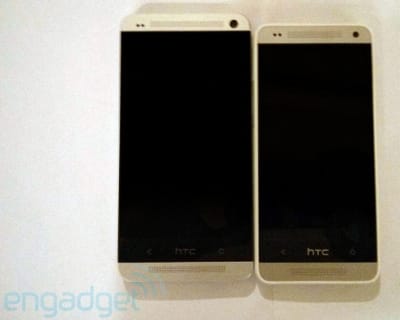 If you want an initial idea of just how a 4.3-inch HTC One would look side by side with its bigger brother, this image over at Engadget will give you an exact idea of what is coming this Summer. Don’t forget though that the mini version will only be equipped with a dual-core processor, unlike the original model which packs a quad-core based processor inside.

The mini HTC One looks a bit strange standing there next to the larger version – what do you think? Let us know if you plan to save your money for a smaller version or not.