HTC are still keeping silent on plans to offer a miniature version of their popular flagship One smartphone, but leaks are continuing to emerge which suggest that a release is coming soon. After previously showing you early images of the HTC One Mini in white, we now have what looks to be the same device in slick black.

While there are obviously a good number of consumers who believe that the bigger the display screen is the better, there is also a good portion who value style and compact form factor over anything else. HTC may have been targeting some of the 5-inch devices on the market already with their One, but soon they will be catering for everyone else with a 4.3-inch HTC One Mini that should win over those who may be on the fence.

With this in mind, a site over in Bulgaria has managed to get their hands on some images which appear to show the black HTC One mini in the wild. One image in particular that we want to focus on shows what the black mini at 4.3-inches will look like side by side with the 4.7-inch standard model enclosed in a protective cover. 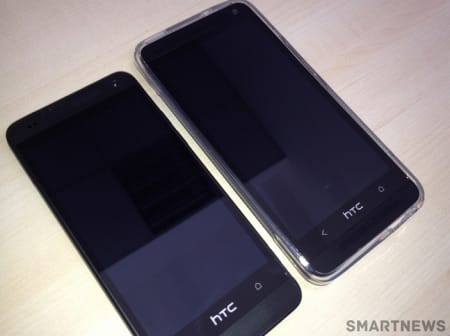 Truth be told, they almost look exactly the same based on this image. Then again, that will all change when you actually have the opportunity to hold both devices in your hand – hopefully we’ll be able to give you the lowdown on this aspect soon. Speculation has suggested that the HTC One mini would be available throughout Summer, so hopefully HTC are about to drop some official details, including which carriers the mini version will be available on.

Have you been waiting for this smaller version, or have you already picked up its bigger brother? Do you value display size over any other factor when purchasing a smartphone?