If you are a HTC One M7 owner on AT&T, Tuesday is the big day for you. HTC has just announced and confirmed that the HTC One Android Lollipop update is ready to rollout via OTA notification.

It’s been a long wait and an agonising one for those that thought the HTC One may not receive Lollipop. However, HTC’s VP of Product Mangement Mo Versi has revealed on Twitter that the update has now been ‘technically’ approved.

As a result, AT&T owners should start to prepare for the update to arrive at any moment on March 31. Remember, the update will not arrive to everyone at the same time. 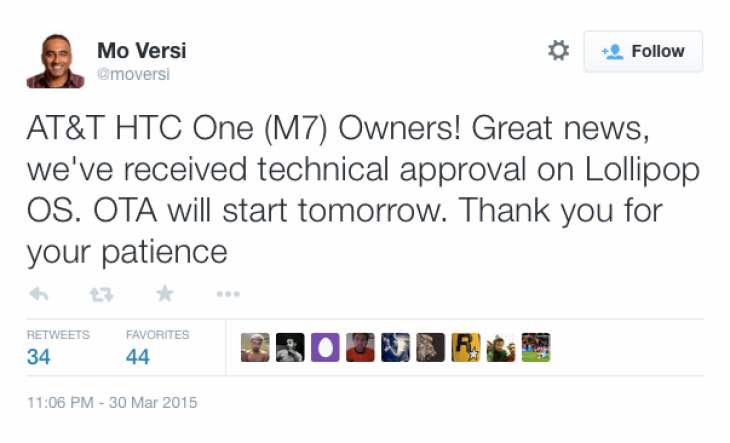 Some regions will get it first as the update rolls out gradually. To help speed up the process though, you are free to head into your device settings to check whether you can push the OTA update manually.

Aside from the expected performance boost that Lollipop will bring, the HTC One will also benefit from Google’s lovely Android Material Design interface – which will inject some life into your device compared to Jelly Bean.

As far as we’re aware, the update is not live yet but it’s still early hours in the US. If you have a HTC One on AT&T, let us know if you have the update yet in your region, or if you are still waiting.