We don’t yet know the official name of HTC’s next flagship handset, but most people for now anyway refer to it as the One M10 Perfume. We have yet to learn any official details in terms of what its hardware will be, but there is a possibility that the smartphone could come with three memory options so that you have the choice of increasing the performance or not.

According to a Tweet from LlabTooFeR, which is a HTC ROM developer, they claim that the HTC One M10 could come in a choice of three storage options, and these are 16GB, 32GB and 63GB.

This does not seem like a great stretch of the imagination seeing as though most high-end Android handsets already offer these storage options. 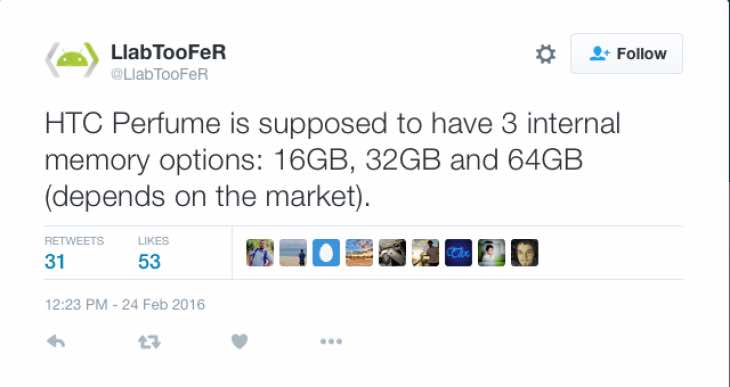 Ok, we know that having three internal memory options is a good idea, although 16GB is seen as far too low for this day and age. We presume that this option will be aimed at emerging markets, and there is always the choice of increasing that storage with a microSD card.

It will be interesting to see how the HTC One M10 compares to Samsung’s Galaxy S7, as the latter is a powerhouse in terms of its specs. There are suggestions that HTC may not follow its S7 rival and opt for the MediaTek-powered variant rather than the Snapdragon 820 processor from Qualcomm. There has also been confusion to its name, as HTC might not even call it the M10 One, and so we will have to wait until its reveal next month.