Specs for the HTC One Hima have come to light along with a narrowed down release date, and the reason we are interested in this handset so much is because this could be the name for the M9, the successor to the popular HTC One M8.

We already knew that the follow up to the M8 might not be the M9, as they were not happy with its naming, especially a few years down the line because it would have been called the M12 etc. The last time we knew, no other name had been thrown into the pot, so it will be interesting to see how well received Hima will be from owners of the current model.

However, it is not the name that interests us the most but rather its specs. The HTC One Hima (M9) could come with the upcoming Snapdragon 810 processor from Qualcomm, a massive 3GB of RAM and a 5-inch display with Full HD. These specs go against previous reports, although we much prefer these because increased performance. 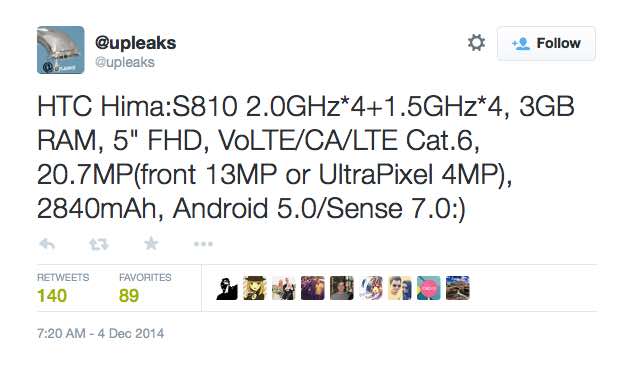 If these specs found on Twitter do come to light on HTC’s next flagship handset, then it will become a market leader when released in middle or end of March 2015. Having said that, the Galaxy S6 will be released not long after and so it will be a pretty good showdown between the two.

This could all be very wrong and Hima could just be its development name and HTC could very well stick with its naming procedures and call it the M9.