With the imminent arrival of the 4G LTE equipped HTC Thunderbolt smartphone on Verizon, some of you are probably wondering what happened to the HTC Merge handset, which was heavily leaked towards the end of the last year, but never actually saw a release.

The good news, is that we have an update on the handset for you now, as a new picture of the device has been obtained courtesy of Droid-Life, and it shows the device running on Alltel, yes the same carrier which Verizon bought in 2008.

Some of you may be disappointed about this, as it looks like the chances of it releasing on Verizon are dead and buried. While the specs of the handset aren’t amazing, most of you liked this handset because of the nifty looking keyboard, and if you aren’t in an area which Altel operate, you may not get the chance to use it. 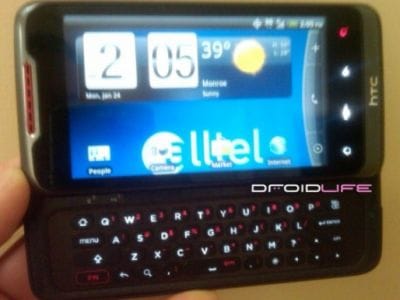 Hopefully we’ll be hearing more about the HTC Merge on the Alltel network very soon. For now, give us your thoughts on the possible release – are you sad to hear this handset won’t release on Verizon?

Here is that famous hands-on video of the HTC Merge running on Verizon if you missed it before.