Several top of the range smartphones are expected to release next month including the much anticipated Motorola Droid Bionic and the infamous Apple device the iPhone 5. Another device that has begun entering the fray though it probably won’t release for a while yet, is the HTC Holiday. Today we have news of an image that has surfaced which features the handset with a front and back view.

We first brought you news of the Holiday back in May this year, where a few of the specs were released and early indications pointed to it being snapped up by AT&T in the US. We also brought you news suggesting this was AT&T’s secret weapon against the upcoming Droid Bionic from rival carriers Verizon Wireless. HTC has been enjoying a lot of success in the Android Market as of late and while they are expected to release their HTC EVO 3D soon, a Droid beater could be what they need to cement their place as a dominant manufacturer in the market.

The image that has appeared over at IBTimes, and apparently several other websites as it was leaked, shows the Holiday with an unusual ‘CALIFORNIA’ sticker attached to the back. While it is not clear what this sticker actually means or what it is for, the site is suggesting it could be that the device may be launched in select parts of the US exclusively.

While no information has been given about when the Holiday will arrive, we have details on what it is expected to arrive with. The specs include a 1.3 megapixel front-facing camera with an 8 megapixel camera on the back, 1GB RAM, a 1.2GHz processor, Android OS and an impressive 4.5” qHD display with 960 x 540 resolution. The device is also rumored to feature a conductive charge port.

Are you impressed with what we know about the HTC Holiday so far? 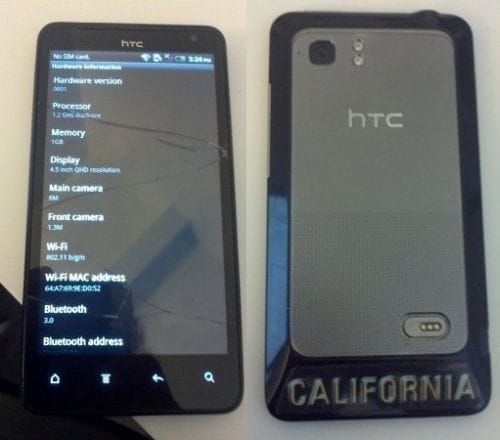