Some exciting news to deliver to HTC fans now, as we are hearing numerous reports, that the handset maker is preparing to release their first Windows Phone 7 handset before the end of the year – thought to be the HD3.

As reported from Pocket-Lint, the phone is still in the ‘concept’ drawing stage, unlike the LG panther and the recently announced Samsung Slate.

However, according to speculation on the internet, we already have some rumored specs for the HD3 – they are as follows:

Those are some mighty specs you have to admit, lets hope they are confirmed in the next few weeks. Considering that the HD2 was very well received among the public, the HD3 could be a real powerhouse for the company in terms of sales.

Let us know what you think about the specs above – we’ll update you when we know more news. 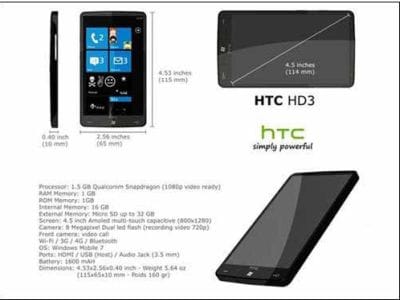