The weird HTC Flyer tablet was announced yesterday, but we had a little concern when we learned that the battery and the performance of the Android 2.4 Gingerbread devcie would make it lag behind the likes of the Apple iPad. However, we do have to remember that they are two different size devices, and the fact that the HTC Flyer offers Stylus and Scribe support. So could this really be a game changer?

Engadget said that it was nice to see a tablet device at MWC 2011 that was a little different to all the other Android version, and reminded them a little of Microsoft when they first thought about a tablet. For those of you who think that the Flyer will come with just a standard stylus then think again, as the phone maker has partnered with N-Trig to make things a little different.

Joanna Stern from the gadget blog has concerns with using a stylus, as it is a known fact that Google Android was never developed to use such a device. However, we have no fear that HTC has improved on its custom UI to make sure that all works how it should. 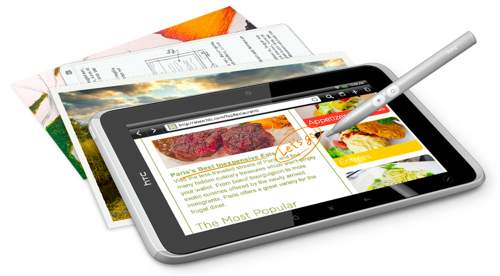 Joanna Stern has written yet another article on the Flyer, saying that there will be more devices like this and apps that fully support the stylus. So it seems that this is just one of many; maybe it is a game changer after all? It is all very well using your hands on touchscreen tablets, but the finger will never be able to draw things as precise as a stylus can — you only have to watch graphic designers to know what we are talking about.

We have already established that the HTC Flyer is a strange device, but is it a game changer?