Prior to MWC 2011, we recently informed you about a rumored list of specs for the upcoming HTC Flyer tablet. HTC has now announced the device officially, and we have a confirmation on what specs the device will actually possess.

Unlike the other recent tablets that have been announced by manufacturers within the last few days, we can confirm that the HTC Flyer will not come with a dual-core processor – are you disappointed about this?

Instead, HTC has opted to crank up the processing power, by offering a single core 1.5Ghz chip which is sure to raise a few eyebrows. This will probably make the device the fastest single core tablet on the market, but will it be able to cope in the performance department against the likes of the Motorola Xoom, Samsung Galaxy Tab 10.1 and LG G-Slate which will all be touting 1GHz dual-core processors.

Another somewhat ‘risky‘ move by HTC, is the fact that the 7-inch Flyer will run on Android Gingerbread and won’t be jumping on the Honeycomb bandwagon. However, the Flyer will be equipped with version 2.4 of Gingerbread and HTC has already stated that it will look visually different than 2.3 Gingerbread. 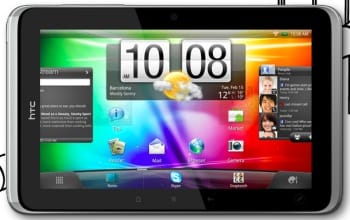 Other specs of the Flyer include 32gb of memory, 1GB of RAM, Aluminium design, 5 megapixel rear camera, 1.3 megapixel front camera and MicroSD support. You can check full specs over on the official HTC website here.

What are your thoughts on these ‘unusual’ specs by HTC. Do you think that a 1.5Ghz processor will turn out to be a risky move or not? And are you disappointed that you won’t be getting Honeycomb with the Flyer. We predict that this factor alone will be a major turn-off for most of you.