The HTC Flyer was finally released yesterday, and now it is time to see if all what we have been reading over the past few months is true. There have been a number of reviews on this new tablet device, but it is the HTC Flyer battery and camera review that we are more interested in. All we will tell you for now is that it is impressive and disappointing.

The battery life is one of the things that will impress you the most about the Flyer, as Engadget spent the whole day throwing everything but the kitchen sink at it, and they still found that there was 20 percent life left. Most of the things that they tried required 3G, as well as an hour on Angry Birds. Now you will see what we mean by impressive.

You would think that some of the apps would have taken most from the battery, but you would be wrong. The main culprit for high battery use was the camera, which leads us nicely into the disappointment. Although the main rear-facing camera is 5-megapixles one assumes that the lens and software are not on par with rivals, as it seemed to struggle quite badly. 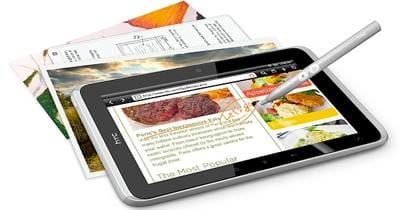 In the test the HTC Flyer had almost perfect lighting, yet still the camera would produce blurry snaps. Engadget believes that the lens is unable to handle that amount of pixels, and from what we have seen they do have a point. The 1.3-megapixel front-facing camera did not perform that well either; however it will be just good enough to make and take video calls.

Hopefully we will see a few real-world tests now that the device is available to buy. How do you think the HTC Flyer will perform in this competitive tablet market?