We have an update for those of you who are interested in picking up the HTC EVO Shift 4G at Sprint, as a new picture of the device has been leaked, along with a possible confirmation of processor as well.

As reported from Engadget, a new picture has been uploaded courtesy of Phone Arena, and it is the first time that the device has actually been shown in the open.

We’ve already had a brief idea of how the handset looks, but this latest pic reveals that the handset will feature a stylish chrome trim which you can see around the edges below. We also get a close-up look at the unique slide-out QWERTY keyboard, which judging by the pic, looks like it’s sporting a blue background. 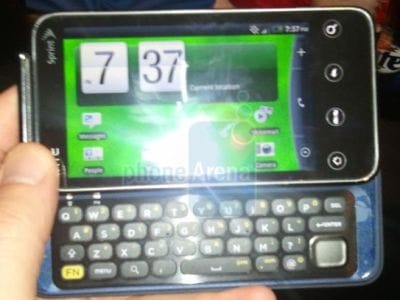 With the appearance aside, Engadget also state that the EVO Shift 4G will be carrying with it a 800Mhz processor, which you may be slightly disappointed about considering that other manufacturers are now looking at dual-core processors – like the recently announced LG Optimus 2X with a dual-core Tegra 2 chip.

Take a look at the image above and let us know your thoughts on it. Are you interested in the EVO Shift 4G or not? Are you surprised that it may only come with a 800Mhz processor?