We told you yesterday that the HTC EVO 3D was coming after specs had been revealed prior to it’s announcement at CTIA 2011, and now we can confirm that Sprint has just unveiled the glasses-free 3D device, and it will be exclusive to their network as well.

For those who don’t know yet, the HTC EVO 3D features a 4.3-inch QHD 3D Display as well as dual 5 megapixel cameras that can shoot 3D images and video. It’s not just the 3D features that make this handset stand out though, as it also comes with the latest hardware tech as well, so it’s a phone definitely worth considering.

It also packs a 1.2Ghz dual-core processor, Android 2.3 Gingerbread, 3G and 4G mobile hotspot support via WiMAX, a 1.3 megapixel front camera, 1GB of RAM and Google Voice – those are some of the highlights on top of the standard connectivity options you’ll get on the handset.

According to Sprint’s press release, the HTC EVO 4G will release sometime this Summer, we don’t have a solid date for you yet, but we’ll be sure to let you know when we do. You can view a great picture of the device below, taken from CTIA 2011. You’ll can view a full gallery over at Engadget here if you want to see more pictures. 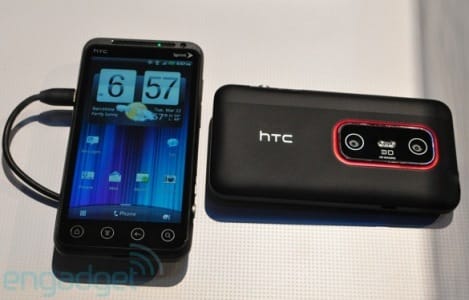 What are your thoughts on this device? How many of you are excited about the 3D features? We definitely are!