Yeaterday we first introduced you to the HTC Edge, the reason why this smartphone is so exciting is because it is said to be the first-ever smartphone to boasts a quad-core processor. Today we’ll explain just what this monster of a smartphone should be capable of.

Let’s get the ball rolling by reminding you that the NVIDIA Tegra 3 “aka Kal-El” platform consists of four cores and a companion core. The performance cores will run at up to 1.5GHz each and the companion core will run at a maximum of 500MHz – therefore any of you who were worried about battery life can see that steps have been taken to ensure that you device’s battery won’t drain too quickly.

To give you some insight about performance we have embedded an image below which shows one Kal-El processor running the same benchmark as an Intel Core 2 Duo and a dual-core Tegra 2 processor – in this test the higher score is better, the results are as follows: Tegra 2 = 5,840, Core 2 Duo = 10,136 and Tegra 3 (Kal-El) = 11,354. 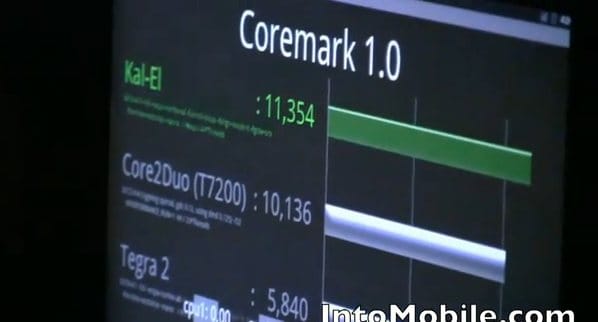 To see that a mobile processor is outperforming Intel Core 2 Duo T7200 processor is pretty astonishing, however if we also tell you that it does this whilst consuming less battery power than the current Tegra 2 dual-core processors we think that you will be blown away.

So let’s get away from numbers and battery power consumption for now and talk about real-world advantages which the Kal-El platform will bring to the HTC Edge (and any other devices which utilize the upcoming quad-core Tegra 3 chips). Firstly it will obviously mean that everything will run fast, so opening apps and general performance will be much improved – but in terms of gaming performance and HD video capabilities there will be huge improvements.

At the bottom of this post you can see a video which shows the Kal-El in action, it clearly states that these processors are capable of outputting visuals at a resolution of 2560×1600 aka 1440p or (Extreme Definition aka XD). To put this into perspective this video will be at a higher bitrate and a higher resolution than Blu-Ray allows, which obviously means even more pixels on your display. At the moment we don’t really have a mass-market need for 1440p capture or output, but 1080p has been out for a while now and it is about time a new standard started to take off in our opinion.

So there you have it folks, if you were doubtful about the HTC Edge’s quad-core processor in regards to performance and battery consumption, think again, this should really set a new standard for other mobile processor manufacturers to follow, we just can’t wait to see what shows up at CES 2012!

Do you think Apple’s A6 platform will be comparable to Tegra 3?