Mobile World Congress 2011 kicked off yesterday and we have already seen some impressive devices unveiled, however one smartphone which failed to impress many was the HTC Desire S, this is an upgraded and refined HTC Desire, however not a huge amount has changed.

Let’s start with the difference in size and weight, the original Desire measured in at 119 x 60 x 11.9mm and weighed 135 grams, the new Desire S is smaller in every way, and lighter, however there is not a lot in it, it measures in at 115 x 59.8 x 11.63mm and weighs 130 grams, also the screen size and resolution is identical.

Software wise both run Google Android and utilize HTC’s Sense UI, however the original Desire shipped with Android 2.1 Eclair and an update to Android 2.2 FroYo was rolled out, as for the Desire S this will ship with Gingerbread and will undoubtedly receive an update in the future, the fact that the Desire S has been released suggests that the original Desire will not get a Gingerbread update.

There is not much difference in terms of connectivity, you still get 3G, GPRS, EDGE, Bluetooth 2.1 + EDR and WiFi b/g, however the Desire S also features WiFi n support.

If you check out the HTC Desire specifications and the HTC Desire S specs you will find it hard to find much else which is different, the only other things worth mentioning are the HTC Desire S’ 720p video capture, larger capacity battery (by just 50mAh) and lack of the optical trackpad, even side-by-side there is not a lot of difference (see below). 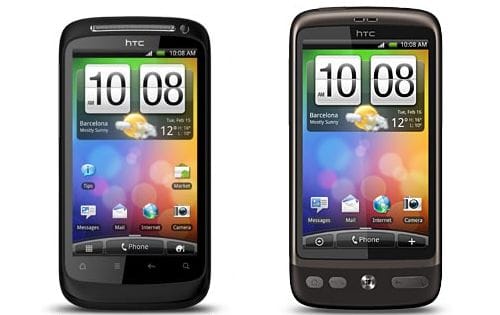 Will you upgrade from the HTC Desire to the Desire S?