If you currently own one of the numerous HTC Desire handsets, you might want to pay attention to this latest bit of news, as we’re hearing that HTC may be planning to announce the HTC Desire 2 at the Mobile World Congress in Barcelona shortly.

As reported from Phandroid, an image has been obtained by the guys over at Pocket-Now, who are stating that the render shown is an accurate mock-up of what the new handset will look like.

We have the picture below for you to see it for yourself. If the picture is indeed legit, then it seems as if the HTC Desire 2 will be similar in appearance to the Nexus One, and carry with it a display screen of either 3.7 or 3.8 inches.

The device will also have a front-facing camera, and will replace the trackball with the Nexus One style touchkeys towards the bottom of the display. We’re hoping that this does turn out to be the Desire 2, as the black casing definitely bumps up the style factor compared to the other Desire models that are available right now.

Stay tuned to MWC 2011 to see if this handset makes an appearance or not. Let us know your thoughts on the ‘proposed’ Desire 2 picture you can see below. 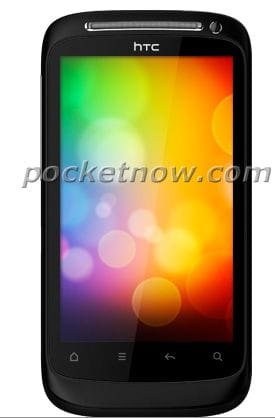