When HP announced that all hardware devices running webOS would be discontinued it was a massive shock, now we have come across a 7-inch tablet which was in the pipeline – this was called the HP TouchPad Go.

Recently Pre-Central managed to get their hands on some TouchPad Go promotional material and a full spec sheet, to say the least this tablet had a lot of potential, however now we know that HP has no plans to release it, it’s a shame really – here’s why.

Let’s start with specs, this tablet was going to feature a 6.95 inch ISP display which outputs at 1024 x 768, a dual-core 1.5GHz Qualcoom processor, 1GB of RAM and Qualcomm’s Adreno 220 graphics processor (GPU). There would have been 16GB and 32GB variants available and no-matter which model you chose there would be a 5 megapixel camera on the rear, a 1.3 megapixel front-facing camera, stereo speakers, Bluetooth, WiFi and GPS. It looks like 3G and 4G versions of the Go were also planned. 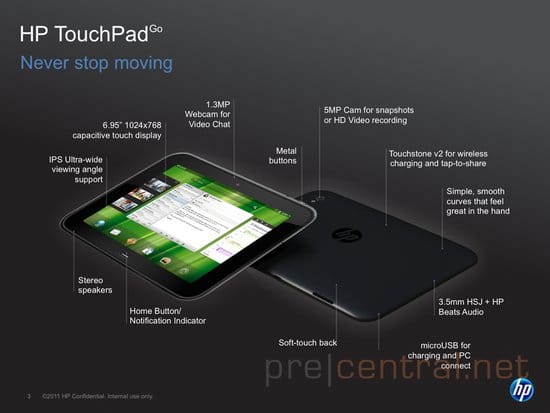 According to sources this tablet would have been roughly 13mm thick and would have weighed no more than one pound – below you can two image which promote the tablet’s GPS and creative functionality, you can see full sized versions of these image via the Pre-Central link in the second paragraph of this article.

Ignoring the display size there is one other major difference in design between the original HP TouchPad and the TouchPad Go, the TouchPad Go has been designed for use in landscape, the tablet’s buttons and cameras give this away.

We can’t help but wonder if thing would have been different if the HP TouchPad Go was HP’s first-ever webOS tablet, we haven’t seen a lot of 7-inch tablets of late, therefore it may have found a niche in the market – we will never know.

Do you think the HP TouchPad Go would have sold well?