While the announcement of the Galaxy S4 from Samsung was a huge deal at MWC, we can’t help feel more excited about the release of the HP 7 Slate, but only because the tablet was there to be touched. From what we can make from this, HP looks set to get into the business once again, as we all know they had to discontinue the TouchPad.

It’s nice to see that HP is back and ready to take on the likes of the Nexus 7, so it was inevitable that there would be a HP Slate 7 vs. Google Nexus 7 review video being taken at MWC, just to look over their similarities and no doubt more reviews will appear in the coming days. However, before we take a look at that video review (above) we thought that you might want to know some of those basic specs.

HP Slate 7 will run Android (not webOS or Windows) and will come rocking a 7-inch display, dual-core A9 processor, 1GB of RAM, just 16GB of storage (no 32GB option) and finally a 3-megapixel camera. 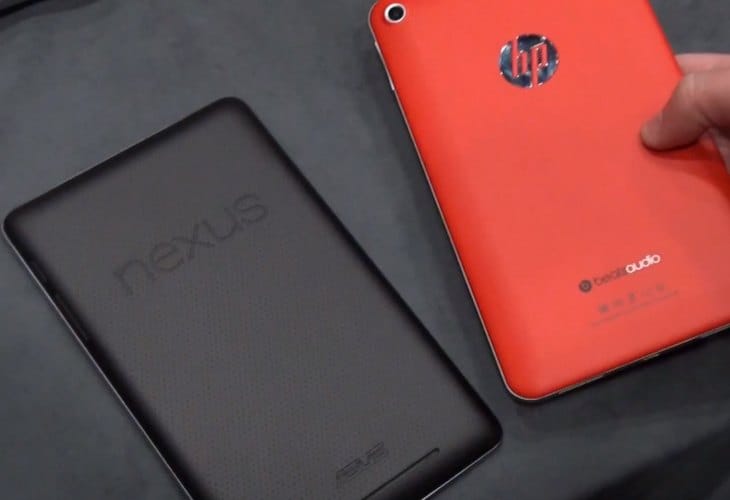 The soft touch rubber to the rear over a stainless steel chassis might not be to everyone’s taste, but it seems to be a direction that so many phone and tablet makers are going in now. One of the main reasons for this is because they are much easier to hold, so less likely that they will slip out of your hand.

Both the HP Slate 7 and Nexus 7 run stock Android Jelly Bean, but they do differ in many other aspects, such as the former has a rear facing camera, but this is not the case for the latter, as it has just the front-facing 1-megapixel camera. View the video above just to see how the two compare.