We’ve been hearing quite a lot of tablet PC-related news over the past few days, what with Dell announcing its 10-inch Windows 7 tablet and news coming in regarding a launch date and pricing for eLocity’s upcoming A10 Android 2.2-based tablet PC.

Now we have received news that HP has just officially announced its much-anticipated webOS run TouchPad — which as we previously mentioned was originally thought to be called the HP PalmPad – tablet PC, during its “Think Big, Think Small, Think Beyond” event in San Francisco.

As Chris Smith at techradar.com notes, the HP TouchPad’s specs include a 9.7-inch capacitive multi-touch display with a resolution of 1024 x 768, a 1.2GHz dual-core Qualcomm Snapdragon processor, a 1.3-megapixel front facing camera for video calling and 512MB RAM. 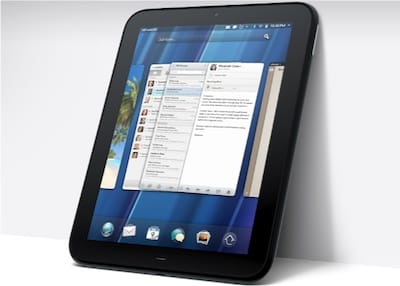 Just like the Apple iPad, the only button on the front of the device appears to be the home button. The TouchPad is said to sync perfectly with the Palm Pre 3 phone, which will enable users to answer phone calls and receive text messages via their tablet PC.

According to a recent article by Chloe Albanesius over at pcmag.com, the Wi-Fi version of the TouchPad will be available sometime this summer, while 3G and 4G versions will be arriving later in the year. What do you think of the new HP TouchPad tablet?