If you are looking for a cheap laptop, but manages to offer better than low-budget specs, then this is where the Chromebook comes in, although you do have the opportunity to go more premium with the Pixel model. Anyway, back to the lower end of the scale, and there is now the new HP Chromebook 13, which has a starting price of $549.

While it may look like a very competent laptop, with its Skylake processor, there are still concerns by the lack of onboard storage, and also the lack up memory options. This is because there is still only 32GB of storage and just 4GB of RAM, which while better than 2GB of some models, 8GB or more would have been a great option. Again, this seems to be a misconception, as it does look as though you can upgrade to 16GB.

We have already seen several HP Chromebook 13 reviews and for the most part they all tend to highlight those two main concerns, although those that have read the reviews have also agreed that this is one of the reasons why they stay away from Chromebook as a whole, and if they want to pay more for improved graphics, then they would much rather a MacBook Air. Having that that, the specs of the Air are starting to fall behind, especially as it still does not have Skylake, and with a recent update only offering double the amount of memory, it does look as though its days are numbered. 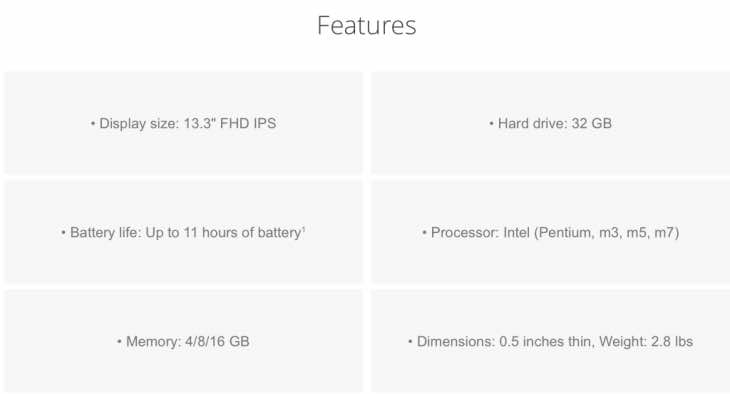 We know that an extra 32GB of storage would help, although an SD card will help to alleviate that, much like you have to do with some of those 2-in-1 Windows devices, such as the one from HP.

Another issue being highlighted by some of those negative reviews is its 6.5 hour battery life, along with sub par performance, even when you opt for the slightly more powerful option. However, when looking on the HP website, it actually states an 11.5 hour battery life, and so we cannot understand why some people are stating otherwise, unless hands-on results do show otherwise?

Maybe we should give this new Chromebook from HP the benefit of the doubt and wait and see just how well received it is because not matter what way you look at it, it;s a lot of laptop for $549.

This model might not be available to buy just yet, but Google does have more details, and instructions on how to be notified when it comes out.