The watchOS 2 release time was all set for last week, but a major bug forced Apple to hold off on making the download live for public users. Today, we enter a new week with high hopes of seeing the watchOS 2 update live today, or a release date by the end of this week at the latest. It’s also worth mentioning that Wednesday has become a favored launch day for Apple, as such look for iOS 9.01 and Apple watch OS 2 releasing around this time.

There’s every chance we could see public beta 2 this week as well, or by Sept 30 at the latest. If you want to read the full watchOS 2 release notes, then just look over this changelog for the GM build that’s almost identical to the public release with a small change expected for the bug found. 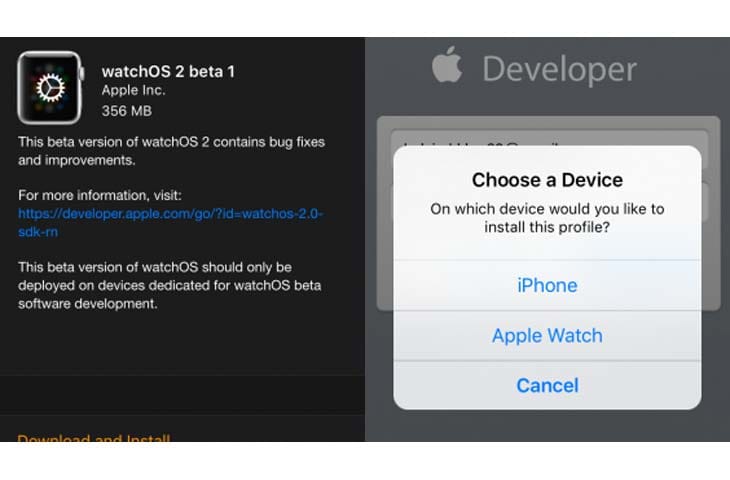 Steps to installing watchOS 2 with iOS 9.1 public beta – Firstly, make sure you have the latest iTunes update. If you have the iOS 9.1 beta installed already, then this process will be simple, but if you don’t then you need to register your device by enrolling as we mentioned via the above link to Apple’s Beta Program. You can also follow these steps to get iOS 9.1 public beta on your device right now.

Once iOS 9.1 is installed – You then connect your Apple Watch to a charger, if less than 50 percent battery life, and head to Safari on your iPhone and put this URL in your browser (https://developer.apple.com/watchos/pre-release/). After heading to that page, you then click the blue download button followed by the download link for “watchOS 2 beta Configuration Profile”.

At this point, you are pretty much done. You just need to select Apple Watch for the device to install on and then follow instructions provided after arriving on your profile screen. Keep connected to Product Reviews, as we will publish news when the iOS 9.1 public beta 2 is live and watchOS 2 public release.