Earlier on we told you how to find all calcified fragment locations in Destiny. Now we wanted to talk about how to get the Touch of Malice exotic scout rifle in Destiny as this will be the main reward for finding 45 calcified fragments and completing the Destiny Hunger Pangs quest.

The word from the Destiny community is that the Touch of Malice is a beast of a scout rifle and could be the new best weapon to use in the Crucible.

Now, we bring you some solid information on how to unlock the Touch of Malice both with a text guide and also a detailed video for those that want to watch somebody else getting it from the beginning. 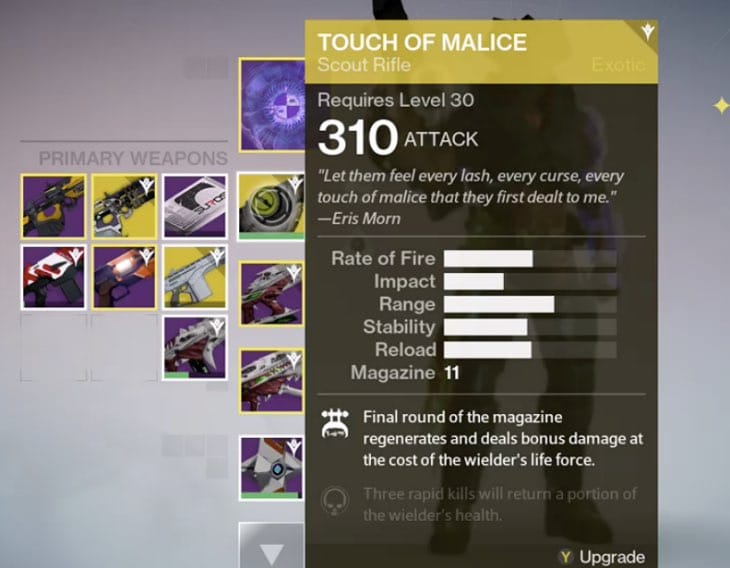 Touch of Malice description reads: “Final Round of the magazine regenerates and deals bonus damage at the cost of the wielder’s life force”.

Touch of Mercy is the one to look out for: “Three rapid kills will return a portion of the wielder’s health” – that is a major attraction and possibly one that Bungie may think about tweaking if it becomes the subject of too many complaints.

The Touch of Malice quest steps guide is a fairly long one, so this tutorial over at Planet Destiny will definitely help you along the way.

Alternatively, we have added a 3 hour video from YouTuber NoahJ456 who also provides some help on how to get the Touch of Malice scout rifle.

Either way, both guides will ensure that you are on the right path to getting this new exotic from The Taken King.

Let us know which step you are on and your thoughts on the weapon once you have started using it. Could it be the new top tier weapon moving forward?