As we told you earlier on, Bungie Day is coming to an end and the big prize on offer for the Destiny One Year Moments of Triumph has been revealed as the Laurea Prima Emblem in Destiny.

We can see that many of you are asking straight away, how to get the Laurea Prima Emblem in Destiny. To do so, you need to work your way through a list of Moments of Triumph achievements in the game – most of which you have probably already completed.

They include things such as getting the Bane of Crota achievement by beating Crota on hard in Crota’s End Raid. There’s also a requirement to get the Bane of Skolas, which is a little more difficult since you need to defeat the Prison of Elders on Hard mode. 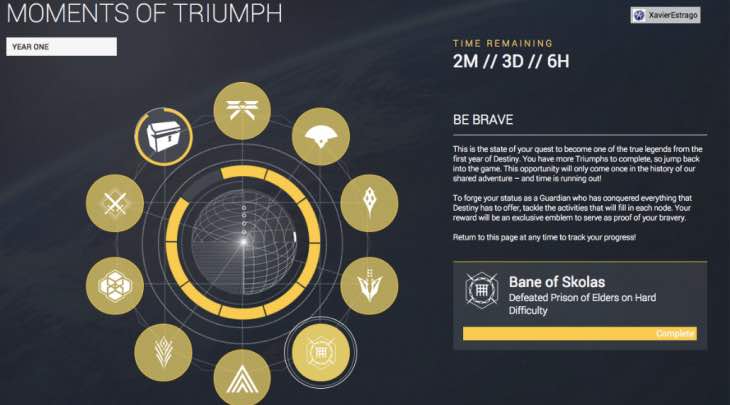 The reward for completing the full set is the Laurea Prima Emblem unlock and you’ll be able to equip it on your guardian to wear for bragging rights.

You can see the full list of Moments of Triumph requirements here. For those who have already completed the list and are asking how to equip the Laurea Prima emblem in Destiny – this will come in September when the Taken King DLC launches.

That means there is plenty of time to work through the tasks, so don’t worry about racing to be first as you have a good two months.

Let us know how you get on with completing the Moment of Triumph tasks and your overall thoughts on the Laurea Prime emblem as the reward for Destiny Year One and Bungie Day 2015.