The three exotic swords in Destiny are the Raze Lighter, the Dark Drinker and the Bolt Caster – unlocked with the ‘A Sword Reforged’ quest in Destiny.

Right away we can see that many of you want to know how to get the Raze Lighter in Destiny, as this seems to be the most popular of the three since it deals out solar damage and comes with the unique ability Phoenix Uppercut.

The main steps that have been revealed via data mining suggests that players will need to wait until every Wednesday to place an order with the gunsmith. 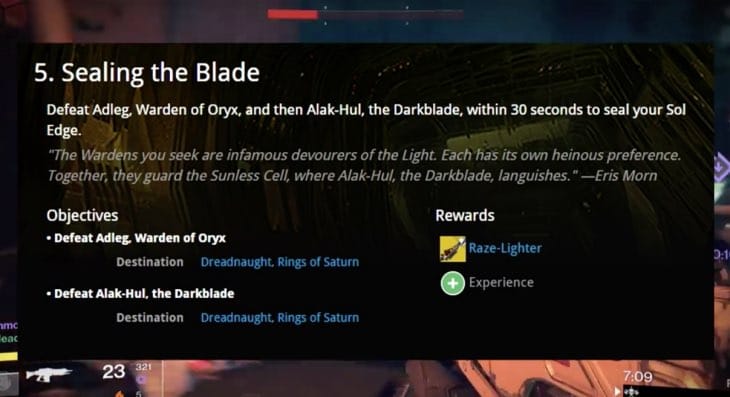 Once done, then the key aspect into getting these exotic swords is to kill two bosses within 30 seconds each in order to obtaining either the Raze Lighter, the Dark Drinker or the Bolt Caster – depending on which Legendary version you have between the Arc Edge, Soul Edge or Void Edge.

For example, those wanting to unlock the Raze Lighter will need to beat Adleg, Warden of Oryx within 30 seconds and then do the same for Alak Hul – whom both will be waiting for you in the Dreadnaught.

Those looking to get the Dark Drinker exotic sword in Destiny will need to defeat Heolstor, Warden of Oryx and then Akal Hul within 30 seconds.

Finally, the Bolt Caster can be obtained by beating Thracu and then Alak Hul both within 30 seconds to seal your sword and upgrade it into its exotic form.

As far as we’re aware, nobody has managed to beat these bosses within 30 seconds yet but tell us how far you get below and your progress on this if you already are at this stage of the exotic sword quest in Destiny.