Many MKX players are excited for the release of Tremor, purely due to the fact that it is going to come with one of the most infamous fatalities in MK folklore.

This belongs to Kung Lao, as we can confirm his MK2 fatality will be released as part of the Klassic Fatality Pack 2 for MKX. Without further ado, we can now give you a heads-up on this as many of you will be asking how to do Kung Lao’s Hat Split fatality for PS4 and Xbox One.

Right now, the fatality is in the game but it is locked until the release of Tremor. A screenshot below confirms this, also confirming that this is the same fatality as the one he brutally used back in the 90s with Mortal Kombat 2. 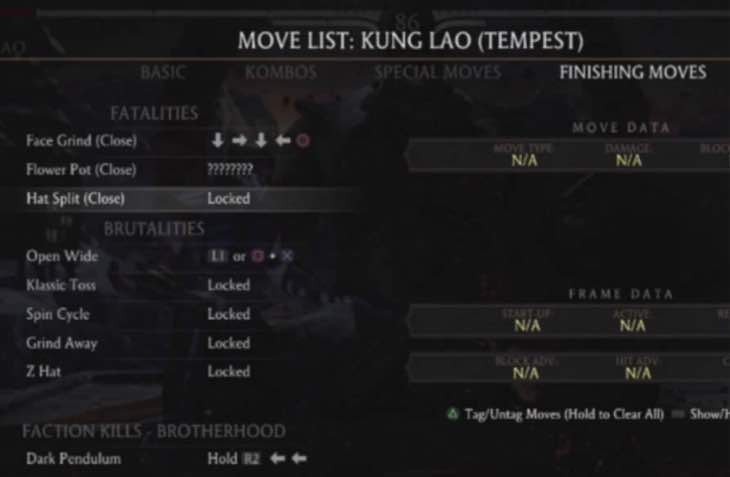 We are not 100% certain on this, but if NetherRealm uses the same button combinations to Unlock the Hat Split fatality in MKX, press forward, forward, forward X on PS4 – ending up within sweep distance.

On Xbox One, follow the same movements but press A instead. This was the same command (using low kick) as back in MK2, bearing in mind that NetherRealm has already used the same button inputs for the MK1 fatality pack as back on MK1 originally – forward, forward, down, up for Johnny Cage’s decap as an example.

If NetherRealm decides to change this, we will alter the input above upon release. Let us know how excited you are about doing this classic fatality and whether you agree that this fatality alone was one of the reasons why you started to love Mortal Kombat X from the start.

We’ve added the original fatality below from MK2 to give you a reminder of what it looks like.