We have some great news for Clash of Clans players across the globe. We hinted about it earlier in our Clash of Clans update discussion, but now Supercell has confirmed it officially.

Those looking for how to change village clan name in Clash of Clans will soon be granted this as an official feature. Supercell has updated their support page hours ago to say that this is coming, adding that it is already in development and will be released as soon as it is ready.

The developer adds specifically that they have been listening to community requests, so it’s great to see once again that Supercell knows when to listen to their customers moving forward in helping to prolong the longevity of the game. 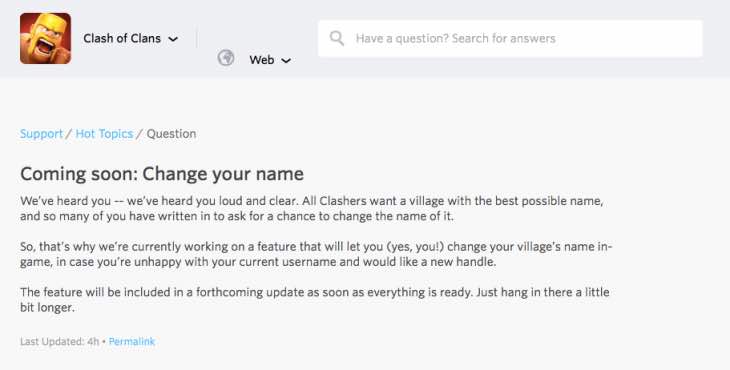 We speak on behalf of most to say that the option to change village name in Clash of Clans on iPhone, iPad and Android is badly needed.

We’ve all made some silly decisions in the past and have had to live with it every day on the leaderboards, but soon you will no longer be able to hang your head in shame.

For now, give us your reaction to this and also what new name you plan to change your village to. Any of you got some really embarrassing names currently that you don’t mind sharing?