You will be amazed at how many people still presume that Apple could release the iPhone 7 in the fall, although we know with great certainty that it will be the iPhone 6S being released in September. We have already seen plenty of rumors that discuss just what features Apple’s new smartphone could come with, and how it should look, and so we thought we would highlight just a few of these.

When we say in the title how the iPhone 6S or 7 should look, we are going on about those features that will give the new model a different look, although we feel that while some of them will be used on the 2015 iPhone, we feel that most of them are more likely to be incorporated onto the 2016 model. 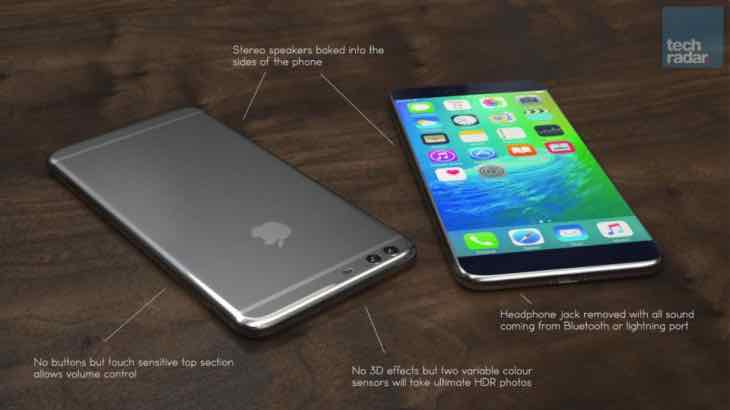 The overall look of the 2015 iPhone update will not be too far away from what we have now, although there are suggestions that there could be two camera lenses on the rear. This is not going to be for taking 3D images, but more so to help improve the overall quality of pictures taken. This will be done by way of adding an ultimate version of HDR mode.

There is also the rumor that the position of the speakers could change to allow for when you have the phone in landscape mode, which we know people do more of thanks to the larger display size. We can also see in a mockup image above that there are touch sensitive volume controls, although if this feature was to make it to the iPhone, then we highly doubt it will be this year.

However, one iPhone 6S feature we do have a good feeling about is the touchID being added to the screen and so doing away with the physical Home Button. This will mean even more space for the display, and so an improved display will be needed.

We do have a hard job believing that Apple is to do away with the headphone jack to make it thinner, and so putting more reliance on Bluetooth, but we just cannot see this happening anytime soon. Having said that, if this feature were to be implemented, then we could expect to see a far thinner iPhone, but maybe not until the iPhone 8 at least.

As for many of the other rumored features that TechRadar has been going over, the rest of them do not really affect the way the new iPhone will look, and so you might want to have a read of their article to learn a little more about some of its upcoming features – or rumored ones that is.