We have some very important information to give you now, with a breaking announcement from Whirlpool regarding a Hotpoint Tumble Dryer recall for February 2017 which has now been modified requiring all owners to take action.

You may have heard about an ongoing issue regarding certain tumble dryers made by Whirlpool that have a potential fire hazard.

This fire hazard involves a potential circumstance where excess fluff could come into contact with the heating element causing the fluff to catch fire.

The affected tumble dryers have the Hotpoint, Indesit, Creda and Proline brand attached to it and were sold to customers between April 2004 and October 2015.

Now, it has just been confirmed that Hotpoint has modified its original advice to owners in where previously it was still ok to use the affected models as long as clothes were dried under supervision. 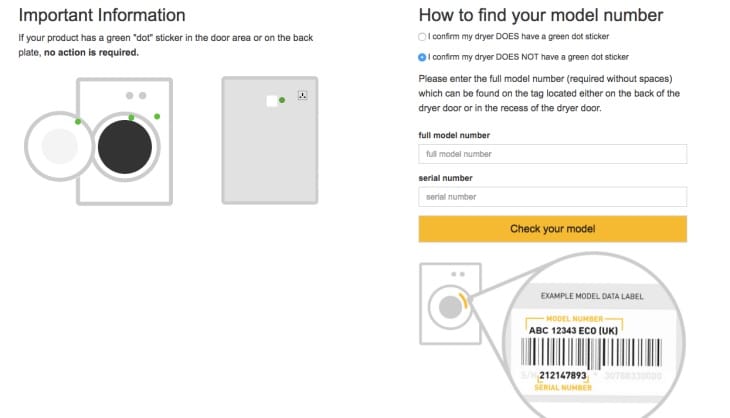 However now there has been an updated statement from Hotpoint to say that owners now need to unplug their device and stop using it until a free modification service has been implemented.

You can check to see if your Hotpoint tumble dryer model number is on the list here, while the image above shows you exactly where your model number can be located – if you have green dots on your unit then you are not affected.

It does seem particularly worrying that Hotpoint only changed their stance after ordered to do so from Trading Standards – you can see evidence of this from the original revision here and the updated version here.

Are you caught up in this tumble dryer recall? Let us know by leaving a comment in our discussion section below – especially if you have already started the modification process.