If you own an Apple iOS device and you’re a regular traveler (whether business or personal) that is familiar with Mobiata’s line-up of travel apps, we have news that could be of interest to you. Mobiata has just released version 2.0 of its HotelPal app for iPhone, as well as unveiling an iPad-optimized version.

According to a recent article over at tuaw.com by Steven Sande, the app is aimed at providing users with a list of hotels for almost any destination. This of course comes in handy if you ever get stuck at an airport somewhere you don’t know due to your flight being delayed (many of us know what that’s like).

Once you launch the HotelPal app on your iPhone or iPad, it then determines exactly where you are and immediately provides you with a map populated by price tags that indicate the nightly rates at each hotel nearby. The app also allows users to tap on the map or type in a location to drop a location pin. 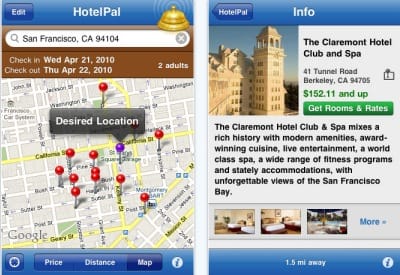 The HotelPal app will then populate the map with hotel pins and their prices. It also displays a side-scrolling list of hotels, which users can then bring up information for by tapping on the button in the list. Users can then choose a hotel and make reservations through Expedia.com, directly from their iOS device. 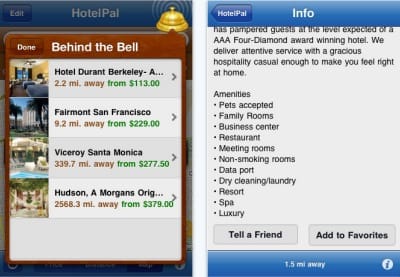 As noted on the itunes.apple.com website, the app allows you to choose from more than 100,000 worldwide hotels, and even enables you to save your favorites in case you ever want to revisit them at a later date. The HotelPal app — which is also compatible with iPod Touch – requires Apple iOS 3.0 or later.