Many celebrities now have some nice tasteful tattoo’s that is a trend being followed by the public, and whether you are a fan of them or not the artwork involved has to be admired. Today we have news of some Horiyoshi III tattoo designs and more with some iPhone apps.

A-Net Digital, LLC are based in Houston and have recently released a couple of new applications for owners of iOS devices. Horiyoshi is a legend in the world of tattoo’s with his artwork and tattoos being seen around the world. They have become recognized as the traditional Japanese style of tattoo called irezumi.

His worked has inspired many tattoo artists around the world including Ed Hardy of the US. The first application is Horiyoshi 3 1.0 for iOS devices. The application is a collection of his works that include a personal collection of photos and drawings, with some of them never seen before now. There are images from his studio and the famous tattoo museum in Yokohama.

Thumbnails are easily swiped through and a simple tap will open up full frame images, images can be found using keywords, favorite images can be bookmarked, and images can easily be shared via email or saved to the device. Horiyoshi 3 1.0 is available on the App Store for only $4.99/£2.99. iPhone, iPod Touch, and iPad required with iOS 4.3 or later.

The next application we have for you is 100 Demons 1.0, which is a digital version of Horiyoshi’s famous 100 Demons art book. This contains stunning illustrations by Horiyoshi of ancient warriors and demons, and is often thought as one of his greatest creations. 100 Demons 1.0 is available on the App Store for only $9.99/£6.99. Requires iPhone, iPad, and iPod Touch with iOS 4.3 or later. 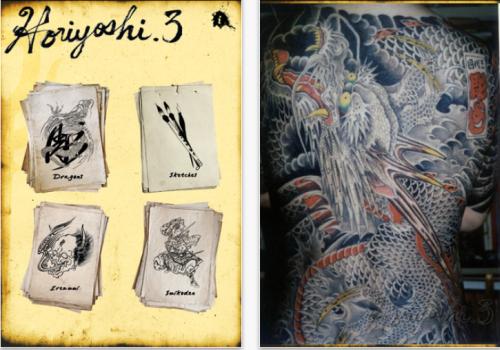