Apple have had a god head start over its competitors in the tablet market, and so far the offerings from the Android platform have not really measured up. The first tablet to have the Honeycomb OS the Motorola Xoom, has disappointed many people who have used it. But now the Honeycomb vs iPad 2 debate may have been answered with the Samsung Galaxy Tab 10.1.

Jason Kincaid of TechCrunch has spent some time with Samsungs new tablet which will be available from June 8. In his opinion the device will do very well, and also points to a bright future for the Honeycomb OS.

The Motorola Xoom has a rubberized back that feels solid but doesn’t feel great in the hand, and it weighs 1.6 pounds. Meanwhile the Galaxy Tab weighs only 1.24 pounds, and even though it feels cheaper sits nicely in your hand. The Samsung feels more like the iPad 2 maybe slightly lighter.

The operating system still has some problems and can be buggy, the browser for instance causes a bit of a headache. If you tap the wrong thing you will find yourself at the bottom of a webpage, or any animations can slow right down. Given time developers can improve and bring more apps for the tablet, which will see the platform grow rapidly much like it did for handsets. But for now the iPad is still the better product. 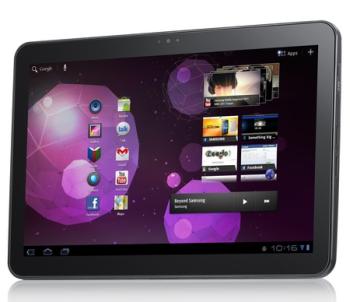 Sales of the iPad will probably not be affected, but many people who don’t want to buy an Apple product are starting to get some worthy alternatives as the platform grows and improves. Will you be considering an Android Tablet?