We have a bit of news to bring you now about the upcoming first-person shooter game Homefront, which will no doubt leave both PC and PlayStation 3 gamers feeling a little disappointed. THQ has just announced that the very first DLC pack will be released as a timed Xbox 360 exclusive.

According to Andy Robinson over at computerandvideogames.com, Microsoft’s Major Nelson has also announced that Xbox 360 gamers will be receiving an exclusive map by the name of “Suburbs.” The Homefront game — developed by Kaos Studios – is due to be released in March this year. 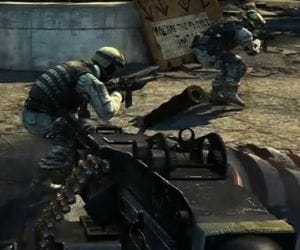 In other news, THQ recently announced that it would incorporate the Online Pass multiplayer system into the Homefront game. According to a recent article at gamebandits.com, the system allows gamers to access online gaming features just once by using a specific code.

Users that don’t have an Online Pass will still be able to play the Homefront game online, but only on a limited basis as they won’t be able to progress past level 5 out of the 75 available. Single player mode will not be affected, because the Pass only impacts the online mode.