There are a number of ways someone could try and prove they have achieved an iOS 6.0.1 jailbreak for iPhone 5, or 4S, which at the time of writing has not been possible according to the well-known hackers. One way unknown jailbreakers want to show their own development on an iOS 6 or 6.0.1 jailbreak is to post a video on YouTube, which is exactly what we’ve seen within the last 24 hours again. The video below this article caught the eye of well-known hacker p0sixninja, aka Joshua Hill, although he quickly points out a few facts about evidence like this.

Apple iOS 6 jailbreak videos for iPhone 5 / 4S can be shot down — we’ve mentioned before that mainstream media are constantly using Twitter for news reports thanks to how fast information arrives onto the popular social platform. This is also the best place to find out the latest about an untethered, or tethered, iOS 6 jailbreak for the iPhone 5 and 4S that are currently unbreakable. Those people making such a jailbreak happen also post messages on Twitter, and the ones to follow are Joshua Hill at p0sixninja, MuscleNerd, pod2g, and planetbeing.

Within the last few hours Twitter user Geoff Bernier pointed Hill in the direction of a new video, seen below this article, which might convince a few people that an iOS 6.0.1 jailbreak has been achieved for the iPhone 4S. The video runs for over 3 minutes showing a claimed iPhone 4S running an iOS 6.0.1 tethered jailbreak, although this visual claim met with a couple of tweets from Hill as seen below. 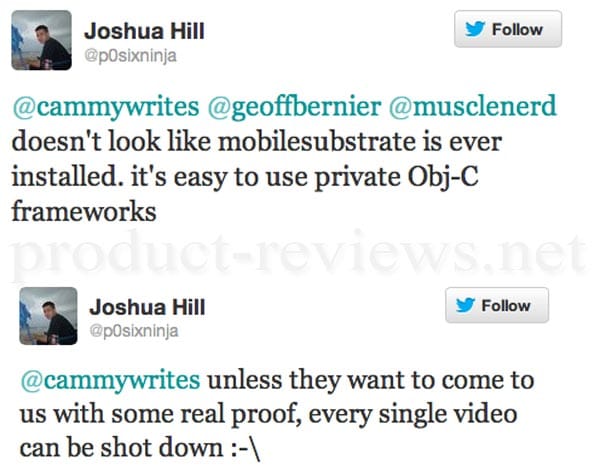 We’ve made it clear before that there’s a closed circle of people sharing progress on any iOS 6 / 6.0.1 jailbreak for iPhone 5 and 4S, which certainly includes the select Twitter users we mentioned above that you should follow. The reason our articles have slowed down on this topic is that there isn’t a lot to report, although the hackers have pointed out before that it’s good to keep users informed of fakes to stop those new to jailbreaking from being fooled.

Do you have confidence that an iOS 6 jailbreak for the iPhone 5, or 4S, will arrive before the next generation launches? We featured this video thanks to the comments it received from Hill, and the fact that he believes “real proof” is needed to stop “every” video from being shot down. You might also want to read about iOS 6.1 beta 3 going live with a jailbreak for older devices, and some nice insight into the current position of an iPhone 5 jailbreak from a panel at D2.