Earlier on this morning we brought you an article about The Serpent of Isis, a new hidden object game for the Apple iPad. We now have news of another hidden object-style game that’s recently arrived on the Apple App Store; only this one is all about numbers!!

The application we are talking about is Hidden Numbers, which has been described as a catchy seek and find game for iPad users. Just as the title of the app suggests, the aim of the Hidden Numbers game is to find all the numbers that are hidden within the eye-catching images.

As noted over on the appdebate.com website, players only have to find the required numbers that are listed below each picture. The Hidden Numbers game features a total of 10 chapters, with each chapter providing users with a time limit of just five minutes. 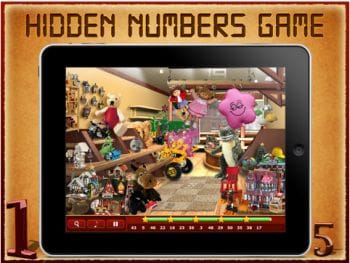 However, each wrong tap while attempting to find the numbers will reduce the user’s time to play. In order to unlock consecutive chapters, users must collect at least two stars out of five. Players also have the ability to use the hint option in order to find the required numbers.

Other features include the ability to play your own background music during the game, a multiplayer mode that enables you to play the game on the other half of the iPad screen at the same time and the ability to create user profiles so you can play as a different user.

We have also embedded a video below this post so you can see the app in action. Have you played the Hidden Numbers game yet? If so, what do you think of it?