EA has dropped a bombshell over the weekend by unveiling a monster Hero Ronaldo card in FIFA 16. As far as we can see, nobody so far has managed to get Hero Ronaldo in a pack on FIFA 16 nor has anyone coughed up the huge asking price that we can see on the transfer market.

Usually we would be able to bring you a Hero Ronaldo card review on FIFA 16 straight away, as there is always going to be a player who will buy the card outright.

However, we can reveal that the Hero Ronaldo FIFA 16 coin price ranges between 3.5 million and 5 million coins – pretty staggering when you think about that. 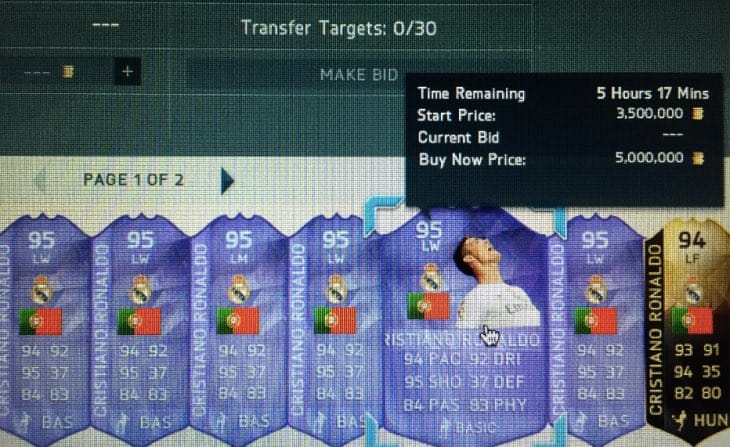 That means nobody is willing to pay that amount of coins yet for a single card, although Hero Ronaldo is playable on FUT Draft which is great.

Furthermore, the odds on getting him appears to be fairly high so FUT Draft is the best way right now if you want to preview the best card in the entire game.

EA has said that Hero Ronaldo is only available for 72 hours, so you have this weekend to get him before he expires out of live packs.

Who will be the first to get Hero Ronaldo in a pack on FUT 16? Give us your reaction to the card and the 3.5 million price point needed to buy him.