Some of you may be patiently waiting for Hearthstone to arrive on iPhone and Android, but we can tell you that Blizzard are already moving on to their next big project. Announced just a few days ago, is Hearthstone Curse of Naxxramas, which is going to be a single player adventure Mode.

The highly popular card game has gained mass popularity over the last few weeks, especially with the arrival of Hearthstone for iPad. Now, it gets even better as we can tell you that this new expansion is also going to be coming to the iPad version.

Blizzard has revealed at PAX East that the Curse of Naxxramas is coming. This mode is going to contain all new bosses to defeat, but perhaps more importantly – new Hearthstone cards to add to your deck as well.

This add-on alone will come with 30 new cards, one of which is the Undertaker card and Baron Rivendare card. A preview of some of the other cards can be seen below. 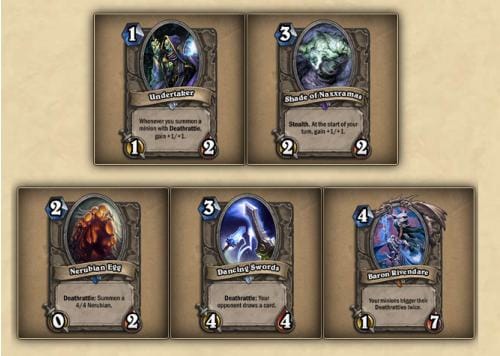 We also love the fact that Blizzard is making the Curse of Naxxramas iPad release date simulataneous as well, meaning that it will come at exactly the same time as PC and Mac versions.

Unfortunately, there is no Curse of Naxxramas price yet, but we will be able to tell you more on this soon we expect. In the meantime, you can head to Blizzard’s website here for a full preview.

How good is Hearthstone compared to other online card games that you’ve played – is it right up there with the best?