We are still without a Hearthstone Curse of Naxxramas release date, but fortunately we do have some new Hearthstone news to tell you about thanks to some recent leaks. The expansion is coming this Summer and now we have a look at some brand new cards that you won’t have seen before.

Blizzard are obviously close to release as it seems that some players already have access to the expansion. We say that as a vast image gallery has appeared on Reddit, showing all new evidence of Curse of Naxxramas being played already.

We have heard that these images have been ‘fan-made’, but we think that’s a cover up as why would fan images be released in such a blurry state as we see on Reddit?

Either way, we could have the first look at Hearthstone Curse of the Naxxramas Boss cards. The example shown above is the Loatheb card which will come with the Necrotic Aura ability that deals 3 damage to the enemy hero. 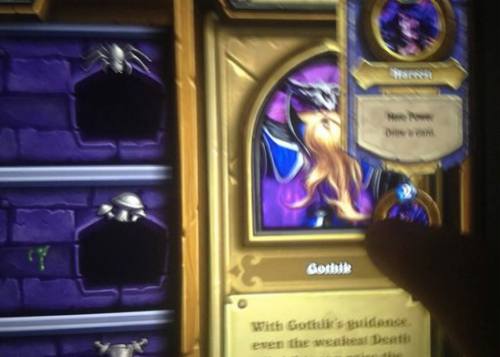 Elsewhere in other screenshots we see evidence of Gothik, another boss for the game that will use the Harvest ability and Noth the Plaguebringer who can use Raise Dead.

It’s the biggest leak for Hearthstone seen so far, but do you think it is legit? It would be a good time for some official Hearthstone news from Blizzard we think – before everyone treats these cards as 100% genuine.

View the full image gallery here and let us know what you think of the new cards. Is Curse of Naxxramas a must-have purchase for you when it is finally out?