The Heartbleed bug is a serious issue and over the past few days has caused a serious amount of concern because people have been uncertain what to do. We recently explained how some experts said to change all passwords, while others said it would be better to avoid affected websites for now.

We even offered advice about changing your Gmail password, which would in turn change several other Google services passwords, although some of our readers did say they would only change their password if Google advised them to.

The list of affected sites was once much larger, but have since been working on patching the bug. There is now a Heartbleed patch website checker, just so you know which sites have been patched and which are still vulnerable. 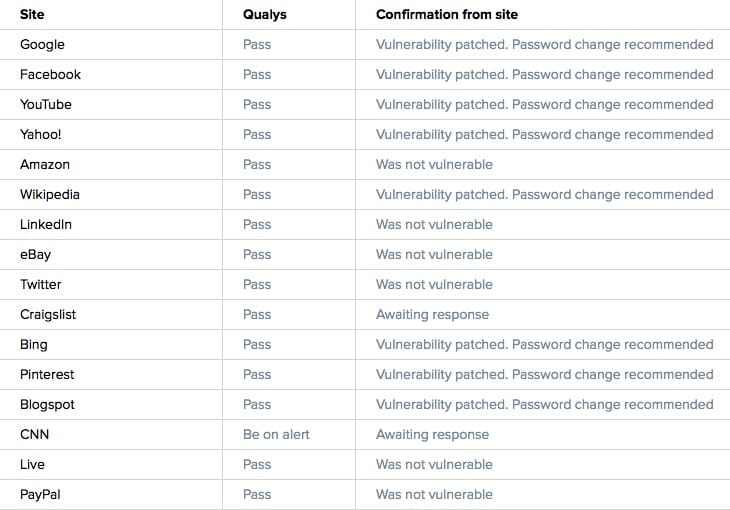 CNN managed to create this list by using Alexa.com to find the top 100 websites and then asked each of them if they have patched against Heartbleed, which would have been a time consuming test. However, at least they have done all the legwork for you. Having looked at the list below, we can see that there are now 106 websites, and we expect CNN will keep adding to it, which you can see for yourself HERE.

CNN has also gone a little further into the Heartbleed vulnerability test by conducting a Qualys SSL Server Test, and while some of them could show that they have yet to be patched, you have to remember that this doesn’t mean they are still vulnerable.

It’s going to take time for all the information to be processed, but one thing is clear, websites are now getting on top of this bug. We don’t expect the bug to adapt either as the guy who created the Heartbleed bug had said it was a mistake, one that he did not expect would be malicious and cause so much pain for certain websites.