Xbox One owners have been waiting patiently for the HBO Go Xbox One app release date to arrive, but so far there has been complete silence for a month. It’s now November and we have seen increased demand for Microsoft to give an update on the situation with regards to any delay that has happened.

We last heard in October that the app was supposedly in final testing and that it was presumably on the way to the Xbox One at the end of October. However, the app is still not available and Major Nelson has been ignoring questions on when the app will be out.

We can see that fans are getting frustrated about this, not because the app isn’t out yet but more so because there has been no communication whatsoever to the Xbox One owners who need this app so badly. 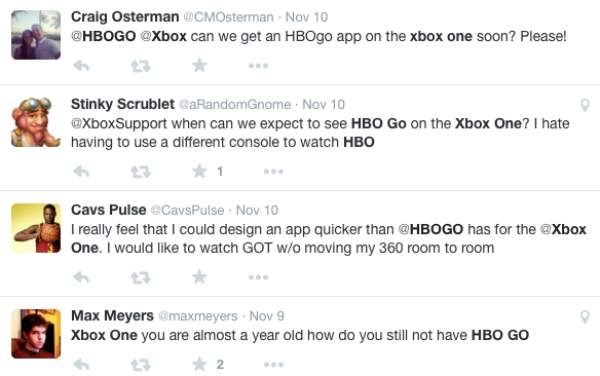 We can only imagine that the final testing that was talked about is still happening. Either that or bugs have been discovered and it simply isn’t available for public consumption yet.

Let’s hope that Major Nelson has some news to share for us soon regarding the app and when it will be available to download for free. Are you waiting for HBO Go on Xbox One above anything else?

Let us know your thoughts on the longer than expected wait and if you agree that Microsoft need to provide an update this month on what is going on.