One of the hottest toys to buy right now worldwide just got even more hotter, with Spin Master Toys unveiling the official Hatchimals Season 2 list of toys to find this year.

Hatchimals were one of the biggest selling toys over the Holiday and Christmas shopping seasons and thanks to the list unveiled, that is not going to change.

We can tell you that there will be over 100 new Hatchimal Season 2 toys to collect, including Limited and Special Edition ranges as well with Hatchimals Magical Meadow, Snowflake Shire and Crystal Canyon.

Which #HatchimalsCollEGGtibles character from Season 2 is your favourite and why? pic.twitter.com/hDxTT36OoX

But that’s not all. Now you also have the chance to find the Golden Hatchimal in specially selected packs. If you find a golden lynx in Hatchimals eggs, then you can win extra prizes as detailed in the image below. 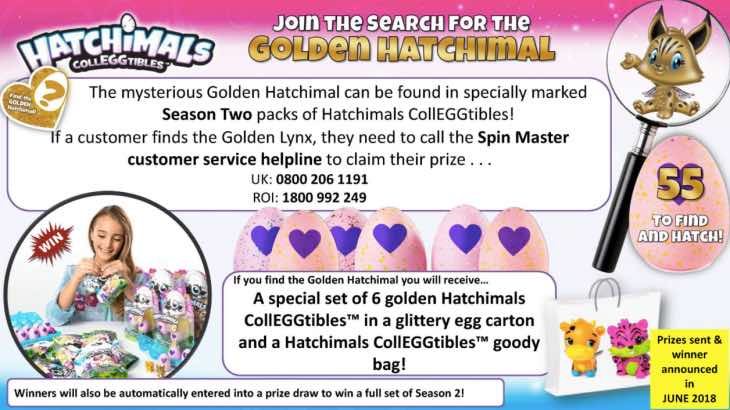 The hunt is now on and Hatchimals lovers should be very excited right now with the unveiling of every single Hatchimals Season 2 toy.

Check out the full list of Hatchimals Season 2 toys here, where you can zoom in and view all of the official names for you to add to your checklist.

Know somebody who has found the Golden Hatchimal already? Let us know below!