If you own an iOS device and you enjoy playing the hugely popular Words with Friends game, then I think we have some news that may be of interest to you. Zynga Mobile has recently launched a new app called Hanging with Friends, which is basically the classic Hangman game with a social twist.

According to Leena Rao from techcrunch.com, the Hanging with Friends game is very similar to the Words with Friends mobile game. Players will have the ability to log into Facebook and Twitter to see if any of their friends are playing, and challenge them to take turns both creating and guessing words.

Players must choose their avatar, and then decide which friends they want to compete against. If users manage to guess a word correctly, they can go on to play another round. However, if they miss a word they could fall. Hanging with Friends will enable users to play up to 20 simultaneous games. 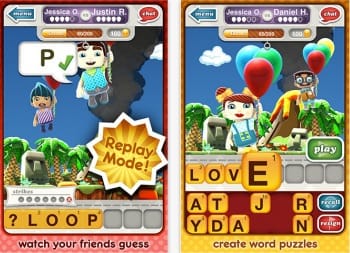 The app also features push notifications, so players can be alerted when it’s their turn. If a user is left hanging from their friends, the Hanging with Friends game will pick a random player as a new challenger. Players also have the ability to use lifelines that provide hints at words, as well as watch instant replays.

As players guess words correctly they will earn coins, which can then be used to obtain further lifelines. Zynga Mobile is offering both a free and paid version of the Hanging with Friends application, with the paid version costing $0.99 from the Apple App Store.

Would you download the Hanging with Friends game for your iOS device?